My story this month is about a food memory that will help to define your palate. I have once again been traveling down memory lane back on the East Coast. I was driving down roads I haven’t been down in 30 years and started to think about places I worked that no longer exist and restaurants that I once I ate at on a regular basis.

Alas, times have changed, and what was once comforting is no longer there. We had a pizza place around the corner in a strip mall that set me on the way towards thinking about Italian pizza, whether made by the Greek family that owned the place or now Neapolitan, where I search to find that perfect chew and cook on a slow-fermented dough. My understanding of Italian food was a small hole in the wall, where I learned to eat chicken caccitore and liver-my mom’s favorite. Italian food was big, covered in red sauce and always served with pasta. Today, I think about vitello tonnato, osso bucco and anything with white truffles and porcini.

I did return to these places in order to relive those tastes that helped define my joy of honest food. However, I was lost in time, as those experiences where only a place in time. What I ate wasn’t great. Sugary pizza sauce, tough dough, under-seasoned chicken served in a chain restaurant environment. However, one taste that hasn’t changed and still has a hold on me is tomato bread.

It was a form of focaccia baked with canned tomatoes, dried oregano and olive oil. Nothing over the top. However, the pans used to bake the bread each had a thousand memories, and it was baked not as a staple but rather as something extra. When I was very young, before my father died, he would take me there on the weekend. He was there for the bread, but as a treat, the owners would give the children a slice of the tomato bread. They didn’t give out candy or lollipops but bread. It was hot, fresh and tasty. I remember hating fresh tomatoes as a kid but had no problem with this. In retrospect, it was the umami of the ferment, the glutamates in the roasted tomatoes and probably the parmesan cheese.

Funny-Italian food was exciting as a child. We had the North End in Boston as the home of Prince Spaghetti Sauce on Wednesday nights. A few of you out there will remember Anthony running home to his mom yelling out the window. I generally don’t eat a lot of Italian food, but there are things that I have learned from those childhood memories. Simple is key.

My cooking can sometimes go over the top trying to use whatever I have to drive flavors and impact. But at the end of the day, simple things such as fresh mozzarella, basil, salt and olive oil can be spectacular. Fresh figs and prosciutto on grilled bread with a touch of ricotta is one thing that would definitely be center stage, especially this time of year when the mercury is hitting 100°F and of course, tomato bread. If I had a chance to sit down with my dad today, he would have enjoyed it to!

Not to be shy about it, but I have been able to work with some of the best Italian cheeses you can get, and they do make awesome pizza. If you haven’t tried them, definitely look for Galbani next time.

My favorite Italian brewer has been Baladin. They can be found if you look hard enough. I hope to find a few more to share with you when I get to Italy again.

Recipes for the Roommate-Impaired: A Comical Look at Eating and Living with People 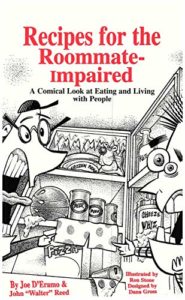 A reboot of the 1993 edition, with author’s notes and updates. Eating and cohabitation go together like hand in glove… or was that foot in mouth? Probably more the latter than the former. Because sharing an apartment means you never quite know what to expect when you open the refrigerator door. Recipes for the Roommate-Impaired can help. It will teach you how to:

Along the way, Recipes for the Roommate-Impaired lampoons the many oddities and consistencies that make the roommate experience so darn interesting. It’s a regular smorgasbord of entertainment and information.