This is a common message among food service companies today. This sentiment among owners, general managers and decision makers is not limited to mortar and brick restaurants. The need for companies in and around the serving of food are asking for the same help.  Catering companies, school food services, contract dining and even food ingredient producers have been challenged to have a competitive food edge. Over the last couple of years, economic conditions have put strains on the kitchen staff and the menus being served. In order to survive a general sentiment took hold, “If it is not broke, don’t fix it”. Chef’s and owners alike buckled down and cut costs by cutting menus, changing specs, adding more convenience products to the inventory and shaving staff.

One of the major fall outs was that executive chefs who ultimately made decisions but not necessarily created revenue by making food on the line were eliminated. Production orientated chefs were the preferred choice of leadership as they produced, kept things going and were affordable. They moved into leadership positions. Kitchens operated on thin margins and maintained as best they could. The thought process of innovation, creating new ideas and incorporating other products fell flat. This was especially true in many of the companies offering catering services. Catering sales dropped as they were seen as a luxury and a luxury that  could be easily eliminated. Menus were trimmed and cut. Restaurants wanted to increase sales by adding catering, caterers wanted other revenue options. The process of menu writing and creativity fell upon the sales staff who were inundated by clients who didn’t want to settle for the same old thing that everyone else was offering. Kitchens may have lagged behind due to the tight reigns. Now the times are changing.  Hence “my chef needs help”.

Companies are moving forward, smaller companies are emerging and younger and less experienced chefs are running kitchens. These chef’s know their kitchens very well and make consistent food as is has been expected of them through these unprecedented times. However there are some gaps and the voices are saying

“Plate presentations are not sharp”

“We need something different”

“The kitchen is just missing that extra edge”

“We haven’t seen anything new in a while”

Well there are solutions. There is help out there. It can come in many forms, from training, mentoring, continued education etc. Executive Chef mentoring is an inexpensive way of investing in your kitchen and your culinary staff. Hiring an on-call executive chef mentor is an alternative to expensive singularly focused continued education classes, dining out programs and cost of finding, hiring and training an executive chef from somewhere else. Is this the right way to pay back your chef for the last few years of hard work. 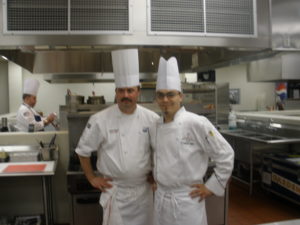 An Executive Chef Mentor can be hired to work hand in hand with a chef and culinary team to change attitudes, teach new leadership skills, re-enforce company policies and bring in a fresh set of eyes that is focused on a clear set of objectives. A chef mentor is an experienced culinary expert who has the skills, experiences and demeanor that a company wants running their kitchen or culinary program. The advantage is that you only need them as you need them. Having that skill set at the end of a phone call or e-mail is a great advantage.  How does it work? There are several basic steps