When I was in boarding school, we were routinely served three starches with our meals: white bread with breakfast, or roasted potatoes or chips with everything else. When I say chips, I mean English potatoes “chipped” and fried. You may know them as pommes frites or French fries. I was just back in England and of course changed my eating routine, which has been to avoid the starches on the side of the plate replaced by a salad. I wanted to see if there was a real difference between “proper chips” and fries. I can tell you that there most certainly is. I was surprised by the quality as well as the constraint in the portion. Personally, I am fed up with the massive pile of frozen fries on my plate that require a freezer, over-processed oil and a timer. Loading a plate up with below-average offerings is not a great indication of culinary skill.

There is a skill in making good chips! I had wonderful hand-cut potatoes that were perfectly cooked and crispy, finished with sea salt and wonderfully aged malt vinegar. I don’t think I touched a ketchup bottle all week. We ate out most days for at least one meal and these were not fine dining experiences but local pubs and cafés. Chips made their way onto most plates, as is the case in the US. It was enlightening from a culinary perspective, as there was a uniquely surprised by what I was served. There are differences in the approach to making chips and fries, and the characteristics in flavor and appearance are remarkable. There are great places hand-making hand-cut fries in the US, but we still “fill ‘er up” and focus on them as a cheap way of filling up the plate to make money. There are few places making chips on our side of the pond.

First, all the potatoes are different. The English use a smaller floury potato such as the Piper Maris or King Edward that are always peeled. English potato varieties are harder to come by in the US, but a large red skin Desirée is a good alternative. Potatoes are also considered a seasonal item, as there some that are only harvested at certain times of the year. I am really excited by that thought of how you can bring that seasonal farm-to-table idea to the misaligned fries! 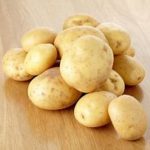 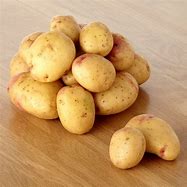 Secondly, the cutting of the potatoes is vastly different. The US followed the culinary influence of uniformed cuts that was brought over from continental Europe and classical cuisine. These were based on the Allumette, Bâtonnet or Pont-neuf classical cuts. The English chips were more rustic and came from street food or the market stall mentality of hand-peeled and “chipping” potatoes by hand, not with a French knife but a small paring knife. There are places in the UK trying to mimic the big steak fry, but it is more a novelty than the norm.

Finally, there is a definite distinction between the preparation. English chips aren’t soaked in water and vinegar overnight to draw out the starch. They are rinsed only and then par cooked in cold water brought to boil for four minutes strained and refrigerated before the traditional double fry method. The rule I follow: 325F oil for 10 minutes, drained and cooled, then five to six minutes in 375-400F oil to crisp. Do not cover or wrap. Hey, I love a good Gene and Jude’s, Superdawg and Fish & Chips in paper but in reality, they are a soggy mess! There was a lot of double- and triple-cooked variations, but one thing did shine through-the return of cooking in animal fat! Yes, duck fat and beef drippings! It is always a game-changer. The flavors are so off the chart!

Salt does make a difference! I have always preached iodized salt when fries are drained and hot right from the fryer. My palette definitely picks up the nuances of the salt. However, fine sea salt at the end makes a world of difference, with a clean briny saltiness. And yes, vinegar. Malt vinegar to be exact. Good chips have sweetness from the potatoes and don’t need heavy sweet corn syrup in ketchup to cover up the taste of bland overly processed commercialized potato products.

So, make some chips, fry some fish or grill some good bangers (sausages) and think about your side dish a little differently. 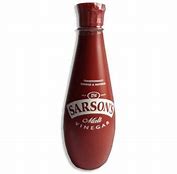 An Alternative to a Pint 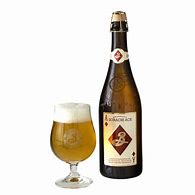 Of course, a great cask conditioned English Bitter is the preferred choice. A great alternative is a Saison with crispy acidic notes to cut through the duck fat. Try this outstanding version (Sorachi Ace) from Brooklyn Brewery.